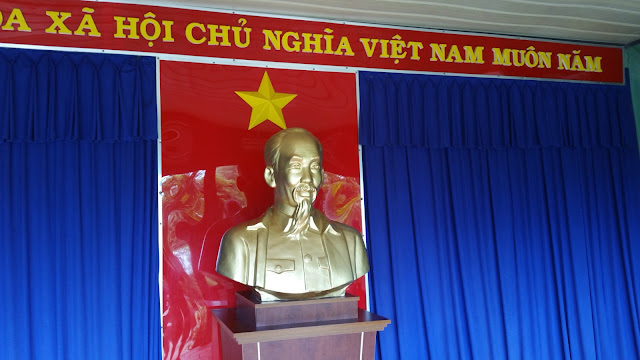 After Siem Reap we headed to Ho Chi Minh City or, as nearly all the locals still call it, Saigon.   After Vietnam's Communist Government opened up the economy to free enterprise investment in 1986, Saigon quickly became one of SE Asia's fastest growing cities. It's present population is around 10 million, and its streets are a dangerous blur of taxis, buses, and, of course, motorbikes, of which there an estimated 8.5 million in the city.

Visiting here, it's impossible to avoid thinking and talking about the "American War" into which my father Oliver H, Barber, Jr. was drafted fresh out of law school and soon after I was born.  The VC government erected numerous monuments to the "reunification" of the country after the U.S. abandoned the war effort in 1976, but there is nothing noting a separate South Vietnam, the doomed regime the U.S. misguidedly propped up with American troops and treasure.

It was a nice surprise that everyone we met in Saigon (and elsewhere in Vietnam) was very friendly to us as Americans--no hard feelings about the war whatsoever.  Many here view the U.S. as having tried to "help" South Vietnam during the war.  Revisionist history?  Maybe simply unhappiness with their current government.  We heard from many that the present Communist system is an unhelpful annoyance that slows everything down and can't even complete a subway after 13 years of planning. 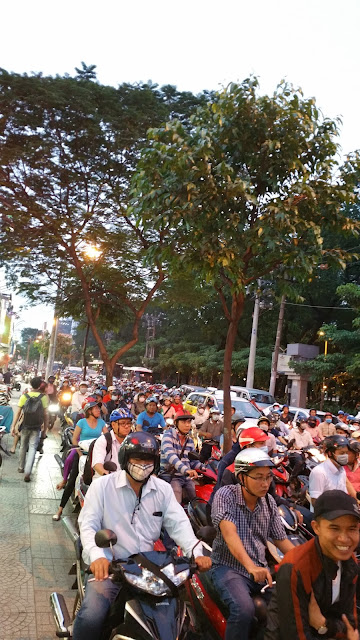 We saw some crazy motorbiking on Java, but Saigon is another level.  Sidewalks are just another way for scooters to get from point A to point B.  It's Traffic insanity.

The intense traffic makes walking Saigon difficult, so we mainly got around by catching an Uber or Grab car. These apps have been lifesavers, especially where, as here, people don't speak a lot of English.  The occasional English-speaking cabby can be a great source of gossip, but sometimes its nice to punch in coordinates on our phone and get across town without having to embarrass ourselves trying to give directions or pay fares.

One of the best parts about our visit to Saigon was a chance to visit with Donn Garton, the first friend I made after we moved to Philadelphia in 1995.  Donn has been in Saigon since 2004, looks like a million bucks, and runs a couple of companies there.

On Donn's recommendation we took a day trip from Saigon to tour the Cu Chi tunnels--a network of Vietcong tunnels made what the VN government calls the "American War."

En route, our guides showed us a propaganda film made in the 60s by the then-North Vietnamese Army which described the entire military action as an American invasion & bombing campaign.  No mention of South Vietnam's existence.  As ever, the winners get to write the history books. 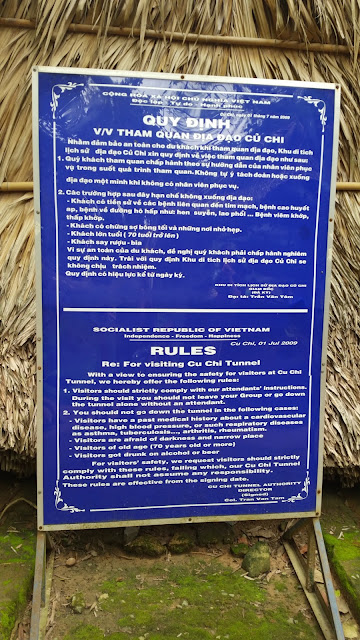 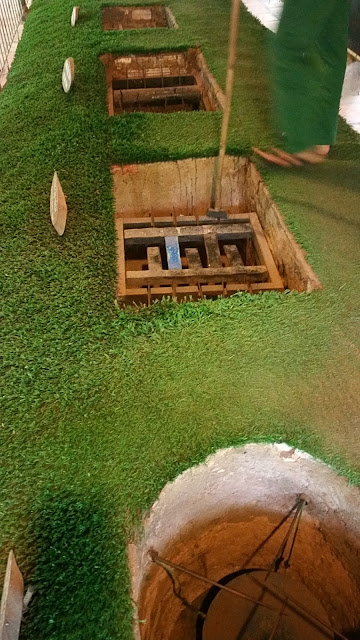